Express.js, an HTTP server for Node.js, has middleware that you have to install to parse and work with the req body objects on POST routes - the problem is, it doesn't make it particularly easy to handle errors yourself.

One issue that I ran into specifically was the JSON parser being set to strict by default - meaning that only objects and arrays are accepted. This is okay for what I want to do, but if you try to send something like a plain string, an exception is thrown. By default, this will expose a stack trace to the public site, which you probably don't want to do. 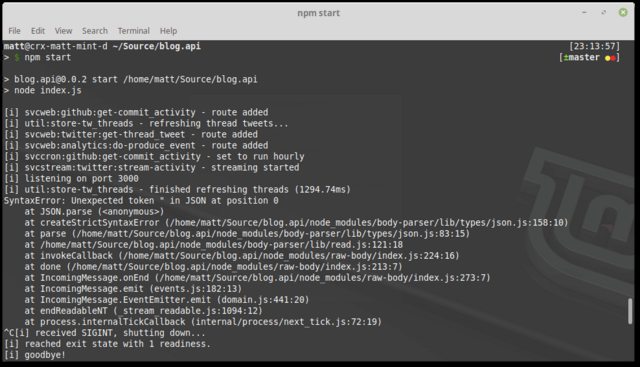 You can't catch the exception in your handler for the route, or the route definition for that matter. This dashed my hopes of using the middleware route-specifically.

The solution that I thought was best was posted in this github issue for the body-parser repo. It involves adding your own middleware handler after adding body-parser: